Guidance for the full year confirmed despite challenging environment

“In a persistently challenging market environment, Henkel delivered overall a solid performance in the second quarter. We again achieved double-digit growth for both sales and earnings. The main drivers were solid organic sales growth, last year’s acquisitions and, above all, the strong US dollar. Organic sales in emerging markets were strong, once again making an above-average contribution to growth,” said Henkel CEO Kasper Rorsted.

Referring to Henkel’s performance in the first six months of 2015, Rorsted stated: “In the first half of 2015 we were able to increase sales by almost 1.1 billion euros to more than 9.1 billion euros. With organic sales growth of 3.0 percent, an adjusted EBIT margin of 16.2 percent and adjusted EPS growth of 12.3 percent we are on track to reach our full year guidance.”

Commenting on the fiscal year 2015, Rorsted said: “We expect the current difficult global economic environment to persist. Market volatility will remain high. In this context, agility and flexibility are key success factors. We will therefore continue to adapt, further simplify and accelerate our structures and processes in line with the changing market conditions.”

Despite the challenging environment, Rorsted confirmed the outlook for the full year: “We expect to achieve organic sales growth of 3 to 5 percent in 2015. We expect adjusted return on sales to increase to around 16 percent and anticipate an increase in adjusted earnings per preferred share of approximately 10 percent.”

Sales and earnings performance in the second quarter 2015

In the second quarter of 2015, sales once again rose double-digit by 13.5 percent to 4,695 million euros. Adjusted for positive foreign exchange effects of 7.3 percent, sales improved by 6.2 percent. Organically – i.e. adjusted for foreign exchange and acquisitions/divestments – sales rose by 2.4 percent.

Net working capital relative to sales increased year-on-year by 0.6 percentage points to 6.6 percent. The rise is primarily due to acquisitions and foreign exchange effects.

Good business performance in the first half year 2015

In the first half of 2015 Henkel’s sales increased significantly by 1,059 million euros to 9,125 million euros. This was an increase of 13.1 percent compared to the first half year 2014. Adjusted for foreign exchange, sales grew by 6.5 percent. Organically – i.e. adjusted for foreign exchange and acquisitions/divestments – sales increased by 3.0 percent, with all of Henkel’s business units contributing with a solid performance.

Adjusted net income for the half year, after deducting non-controlling interests, rose by 12.3 percent from 951 million euros to 1,068 million euros.

The solid organic sales growth was mainly driven by the performance in the emerging markets, which again showed a very strong development. The regions of Eastern Europe and Latin America both recorded double-digit growth. Africa/Middle East recorded solid growth. Organic sales growth in the mature markets was positive. This was driven primarily by the positive performance in Western Europe and, in particular, solid growth in Germany. In a business environment that was again characterized by intense competition, sales performance in North America was positive.

The Beauty Care business unit also continued on its profitable growth path in the second quarter of 2015. At 1.9 percent, organic sales growth was once again above that of the relevant markets, leading to further market share gains. Nominally, sales increased significantly, by 12.2 percent to 1,006 million euros (prior-year quarter: 897 million euros), exceeding the 1 billion euro mark in quarterly sales for the first time.

Regional performance in the second quarter 2015

Henkel’s sales in the Western Europe region increased by 7.9 percent to 1,564 million euros. In a highly competitive market environment, organic sales reached the level of the prior-year quarter. While the countries of Southern Europe along with France and Germany posted positive developments, sales in the Northern European countries and Switzerland declined. Sales in the Eastern Europe region amounted to 707 million euros compared to 739 million euros in the prior-year quarter. However, despite the challenging market environment, a strong organic sales increase of 5.5 percent was achieved. The main drivers were the businesses in Russia, Turkey and Poland. Sales in Africa/Middle East rose from 287 million euros to 342 million euros. Although the political situation in some countries continued to affect growth, organic sales increased by 4.4 percent.

In the emerging markets of Eastern Europe, Africa/Middle East, Latin America and Asia (excluding Japan), sales grew significantly, by 11.0 percent to 2,047 million euros. Driven by all business units, organic sales grew by 5.1 percent and again made an above-average contribution to the organic growth of the Henkel Group. The share of sales from emerging markets declined slightly compared to the second quarter of 2014, to 44 percent. In the mature markets, sales rose 0.4 percent organically and amounted to 2,617 million euros. 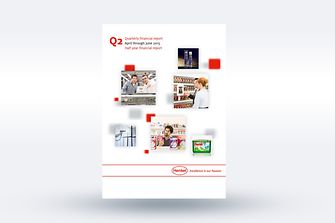 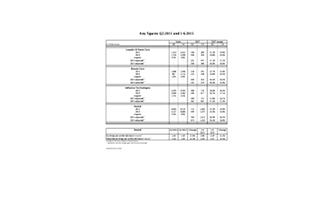