Henkel continues its strong business performance in the third quarter

“Henkel continued to deliver strong business performance in the third quarter. Sales, adjusted EBIT and adjusted earnings per preferred share reached new highs. The successful development and the high quality of earnings was driven by all three business units and the strong commitment of our global team,” said Henkel CEO Hans Van Bylen.

“In the third quarter, we were also able to successfully close the acquisition of Sun Products and secure its financing at favorable conditions. This is the second largest transaction in our company history, elevating Henkel to the No. 2 position in the US laundry care market and adding a range of attractive and well-established brands to our portfolio. We are proud and glad to welcome the Sun employees to Henkel and we will now focus on the successful integration into our North American Laundry & Home Care business.”

Commenting on the current fiscal year, Hans Van Bylen said: “We expect the overall challenging and uncertain market environment to persist in 2016. We will continue to focus on leveraging our successful brands, leading market positions and strong innovation capabilities to achieve our ambitious targets.”

Henkel confirmed the outlook for the current fiscal year: “For the full fiscal year 2016, we expect organic sales growth of 2 to 4 percent. We expect our adjusted EBIT margin to rise to more than 16.5 percent and adjusted earnings per preferred share to grow between 8 and 11 percent,” said Hans Van Bylen.

Sales and earnings performance in the third quarter 2016

In the third quarter of 2016, Henkel’s sales reached a new high. Sales rose by 3.4 percent to 4,748 million euros. The sales performance was driven by the solid organic development as well as acquisitions. Organic sales growth – i.e. adjusted for foreign exchange and acquisitions/divestments – was at 2.8 percent. Adjusted for negative foreign exchange impact of 3.3 percent, sales increased by 6.7 percent.

Strong business performance in the first nine months of 2016

In the first nine month of 2016, Henkel generated organic sales growth – i.e. adjusted for foreign exchange and acquisitions/divestments – of 3.0 percent, with all business units contributing. Nominally, sales increased by 1.0 percent to 13,858 million euros.

Effective September 30, 2016, Henkel’s net financial position showed a balance of -2,661 million euros (December 31, 2015: 335 million euros). The change compared to the end of 2015 was mainly due to payments for acquisitions and dividends paid.

The solid organic improvement was mainly driven by business growth in the emerging markets. In Asia ‏(excluding Japan) and Africa/Middle East, the business unit achieved double-digit growth. Posting a solid increase in sales, the regions of Eastern Europe and Latin America contributed to the successful performance. Sales growth in the mature markets was solid. Sales in the North America region experienced a solid increase in sales year on year. Western Europe posted a positive sales performance in an intensely competitive environment.

Adjusted operating profit at the Laundry & Home Care business unit increased at double-digit rates by 11.0 percent to 265 million euros. At 17.9 percent adjusted return on sales was slightly below the high level of the prior-year quarter due to acquisitions closed in 2016. Excluding these acquisitions, adjusted return on sales showed strong growth. Reported operating profit increased by 8.0 percent from 211 million euros to 228 million euros.

The business unit continued its successful development in the emerging markets with very strong organic sales growth. Eastern Europe and Latin America contributed with double-digit sales growth. Sales in the Asia region ‏(excluding Japan) were below the level of the third quarter 2015, while Africa/Middle East showed very strong growth. Sales in the mature markets were stable. In Western Europe and in the mature markets of the Asia-Pacific region sales were below the level of the prior-year quarter. In North America, Beauty Care achieved a solid organic sales increase.

Regional performance in the third quarter 2016

In a highly competitive market environment, Henkel’s sales in Western Europe were 0.5 percent below the level of the prior-year quarter. The development in the region was mixed. While Germany showed a slightly positive organic sales performance and Spain recorded solid organic sales growth, sales in France and Italy were below the level of the prior-year quarter. Nominal sales amounted to 1,473 million euros, after 1,508 million euros in the third quarter of 2015. In Eastern Europe, sales grew organically by 4.5 percent. The main contribution to this performance came from the businesses in Russia and Turkey. At 733 million euros, nominal sales in the region were at prior-year level. Growth in the Africa/Middle East region continued to be impacted by the geopolitical unrest prevailing in some countries. Nevertheless, a strong organic sales growth of 6.9 percent was achieved. Nominal sales increased by 9.0 percent to 348 million euros.

Sales in the North America region increased organically by 1.6 percent. At 1,067 million euros, nominal sales were 13.5 percent above the prior-year level. Organic sales in Latin America increased by 13.9 percent, with business performance in Mexico making a significant contribution to this improvement, delivering a double-digit increase. Nominal sales amounted to 268 million euros, following 280 million euros in the prior-year quarter. Sales in the Asia-Pacific region grew organically by 4.3 percent. The organic sales improvement resulted primarily from business performance in India, South Korea and China, while sales in Japan decreased. Nominal sales increased by 6.9 percent to 830 million euros.

With an increase in organic sales of 6.7 percent, the emerging markets again made an above-average contribution to the organic growth of the Group. Nominal sales increased by 1.8 percent to 2,031 million euros. At 43 percent, the share of Group sales from emerging markets was at the level of the third quarter of 2015. In the mature markets, sales grew organically by 0.1 percent to 2,688 million euros.

Outlook for the Henkel Group in 2016 confirmed

Henkel expects to generate organic sales growth of 2 to 4 percent, with each business unit generating growth within this range. Regarding the share of sales from emerging markets, Henkel anticipates a slight decrease compared to the prior-year level due to foreign exchange effects. For adjusted return on sales ‏(EBIT), Henkel expects an increase to more than 16.5 percent and the adjusted return on sales of each individual business unit is expected to be above the level of the previous year. Henkel expects an increase in adjusted earnings per preferred share of between 8 and 11 percent. 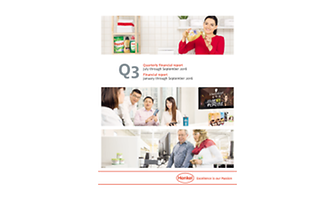 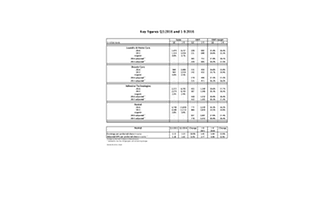