Henkel is paying out a record dividend

Henkel AG & Co. KGaA’s Annual General Meeting saw all resolutions on its agenda passed by the voting shareholders. A total of around 1,400 shareholders attended the event, which was held in Düsseldorf on April 6, 2017.

As proposed by the corporate bodies, the Annual General Meeting approved a 10.2 percent higher dividend per preferred share of 1.62 euros ‏(previous year: 1.47 euros) and a 10.3 percent increased dividend per ordinary share of 1.60 euros ‏(previous year: 1.45 euros). For both share types this is the highest dividend ever paid by Henkel. The dividend payout ratio amounts to 30.3 percent of net income after non-controlling interests and adjusted for exceptional items. The total dividend payout amounts to about 700 million euros. 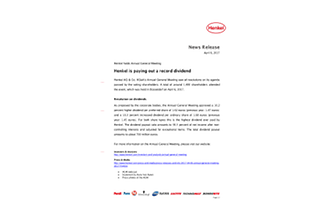