“Henkel delivered a strong performance in the first quarter in a highly challenging market environment. The consumer goods markets were characterized by intensifying promotional and pricing pressure. We were able to significantly increase sales and earnings and to further grow adjusted return on sales. For the first time, quarterly sales exceeded 5 billion euros. Adjusted operating profit also reached a new high. All three business units and all regions contributed to the successful development and the high quality of earnings,” said Henkel CEO Hans Van Bylen.

“This strong performance was driven by our leading brands and innovations, our intensified focus on our customers and consumers, the acceleration of our digital activities and our highly committed global team,” Hans Van Bylen added. “We further strengthened our portfolio and signed two compelling acquisitions.”

Commenting on the fiscal year 2017, Hans Van Bylen said: “We expect the overall volatile and uncertain market environment to persist throughout the year. Currency fluctuations are likely to continue and the prices for commodities are expected to increase. We also anticipate promotional and pricing pressure in the consumer goods markets to further increase. Nevertheless, we are committed to continue our successful development.”

In this challenging market environment, Henkel confirmed the outlook for the current fiscal year: “We expect organic sales growth of 2 to 4 percent. We expect our adjusted EBIT margin to increase to more than 17.0 percent and adjusted earnings per preferred share to grow between 7 and 9 percent,” said Hans Van Bylen.

Sales and earnings performance in the first quarter 2017

At 5,064 million euros, sales in the first quarter 2017 reached a new record level and grew nominally by 13.6 percent compared to the prior-year quarter. Positive foreign exchange effects accounted for 1.1 percent of this growth. The contribution from acquisitions and divestments amounted to 8.5 percent, mainly as a result of the acquisition of The Sun Products Corporation. Organic sales, which exclude the impact of foreign exchange effects and acquisitions/divestments, showed a strong increase of 4.0 percent.

The emerging markets again made an above-average contribution to the organic growth of the Group, with a very strong increase in organic sales of 6.7 percent, while the mature markets registered good organic sales growth of 2.1 percent.

Net working capital as a percentage of sales improved by 0.5 percentage points to 4.9 percent.

The Laundry & Home Care business unit generated strong organic sales growth of 3.0 percent in the first quarter. Nominally, sales increased by 29.5 percent to 1,726 million euros compared to the prior-year quarter. Adjusted operating profit grew by 22.8 percent to 298 million euros, while adjusted return on sales was at 17.3 percent. The acquisition of The Sun Products Corporation contributed significantly to both sales and operating profit. 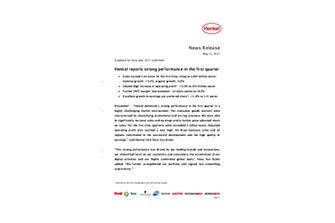 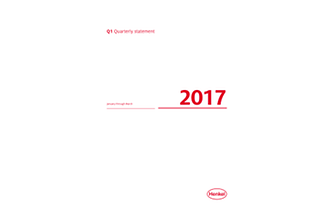 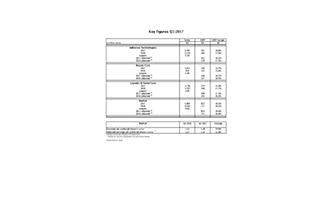