Strong performance in a challenging environment

“2013 was a very successful year for Henkel. Despite a challenging and highly competitive market environment, we achieved our financial targets and made significant progress in implementing our strategy 2016,” said Henkel CEO Kasper Rorsted. “We achieved profitable growth and increased market share in all our business units. All regions contributed to the solid organic sales growth. As in previous years, emerging markets showed a very strong development. In these countries, however, foreign exchange effects had a stronger impact on reported sales.”

Looking at the fiscal year 2014, Rorsted said: “The economic environment remains challenging and we expect persisting foreign exchange effects, particularly in the first half of the year. Thus, we will continue to further simplify and improve our processes and structures, making us more flexible and more efficient. We are focused on implementing our strategy in order to deliver on our ambitious financial targets for 2016.”

“For the full fiscal year 2014 we expect organic sales growth to be between 3 and 5 percent. We expect our adjusted EBIT margin to increase to around 15.5 percent and adjusted earnings per preferred share to increase in the high single digits,” Rorsted said, summarizing the financial targets for 2014.

Commenting on the proposed increase of Henkel's dividend payout ratio, Rorsted said: "We want our shareholders to benefit from our improved performance. Our significantly increased profitability and financial strength allow us to raise the dividend payout ratio from around 25 percent currently to 30 percent for 2013. In the future, the ratio should be between 25 percent and 35 percent of net income after non-controlling interests and adjusted for exceptional items. The dividend increase will not impact our strategic flexibility or our conservative financial strategy."

At 16,355 million euros, sales in the fiscal year 2013 remained slightly below the prior-year level. Organic sales growth, which excludes the impact of foreign exchange and acquisitions/divestments, reached a solid 3.5 percent. This growth was driven by both price and volume, with the rate of increase accelerating in the course of the year. Organic growth in the first half year amounted to 3.2 percent, rising to 3.8 percent in the second half.

Financial result improved by 68 million euros to -113 million euros, due primarily to a stronger net financial position and an improved result from currency-hedging activities. Moreover, net interest expense for pension obligations declined. The tax rate was 25.2 percent compared to 24.4 percent in the previous year.

The ratio of net working capital to sales once again improved significantly, ending the year at 2.3 percent, 1.5 percentage points below the level at the end of 2012. As of December 31, 2013, the net financial position changed from a net debt to a net cash position of 959 million euros. Net debt as of December 31, 2012 amounted to 85 million euros.

In the fiscal year 2013, the Laundry & Home Care business unit continued its profitable growth trend of the previous years. With a strong organic sales plus of 5.7 percent, growth was significantly above that of its relevant markets, which were slightly negative overall. Nominally, sales rose by 0.5 percent to 4,580 million euros.

Sales in mature markets declined slightly in a difficult economic environment. In Western Europe, strong performance in France and solid growth in Germany offset sales declines in Southern Europe. In North America, sales in an intensely competitive and still declining market were slightly below the level of the previous year.

The Beauty Care business unit posted solid organic sales growth of 3.0 percent in the fiscal year 2013, thus continuing to build on the profitable growth of the previous years. Organic growth was again considerably higher than the negative development of the relevant markets. Nominal sales amounted to 3,510 million euros, compared to 3,542 million euros in the previous year.

Business development in the emerging markets was particularly successful, with Asia ‏(excluding Japan) standing out through double-digit growth thanks to substantial business expansion in China. Continuing the successful trend of the recent years, the Africa/Middle East region likewise posted double-digit growth rates, despite political instability. Sales growth in Latin America and Eastern Europe was also solid.

Organic sales in mature markets showed an overall increase. The solid sales growth in North America is particularly noteworthy. Positive sales growth was achieved in Western Europe despite weak economic development – particularly in Southern Europe – and in the face of a declining market. By contrast, sales in the mature markets of the Asia-Pacific region fell short of the previous year’s level.

The increase in organic sales was due primarily to the business unit’s strong performance in emerging markets. Performance in Latin America was particularly dynamic with double-digit sales growth. The Eastern Europe region likewise recorded a strong sales increase. The Asia-Pacific region ‏(excluding Japan) posted a solid performance, while the Africa/Middle East region showed a positive development.

Organically, sales increased in all regions. In a highly competitive market environment, sales in Western Europe were slightly below the level of the previous year at 5,580 million euros. Organically, sales rose by 0.2 percent, compensating for the effects of the recession in Southern Europe. Sales in Eastern Europe increased by 1.6 percent to 3,034 million euros. The organic sales growth of 6.0 percent was driven primarily by the businesses in Turkey and Russia. Despite negative foreign exchange effects, sales in the Africa/Middle East region increased nominally by 0.3 percent to 1,080 million euros. Despite the political and social unrest in some countries, organic sales showed an increase of 17.6 percent. The business units Laundry & Home Care and Beauty Care made a particularly important contribution to this performance.

Due to negative foreign currency effects, sales in North America decreased by 3.2 percent to 2,928 million euros. Organically, sales grew by 1.0 percent, despite fierce promotional and price competition in our consumer businesses. In Latin America, sales remained constant at 1,061 million euros. Organically, sales rose by 8.7 percent, with business performance in Mexico and Brazil making a particular contribution. At 2,524 million euros, sales in Asia-Pacific were 2.8 percent below the prior-year figure due to negative currency effects. The region exhibited solid development with an organic sales growth rate of 3.3 percent, supported particularly by growth in China and India.

Sales in the emerging markets of Eastern Europe, Africa/Middle East, Latin America and Asia (excluding Japan) increased nominally by 1.6 percent to 7,230 million euros in the year under review. Organically, sales rose by 8.3 percent, with all business units contributing. The share of sales from emerging markets increased from 43 to 44 percent.

Adjusted return on sales (EBIT margin) rose by 1.6 percentage points, from 13.6 to 15.2 percent. Reported return on sales was at 12.1 percent, following 12.3 percent in the same prior-year period. Adjusted net income after deducting non-controlling interests rose by 10.8 percent year-on-year, from 370 million euros to 410 million euros. Net income for the quarter amounted to 321 million euros compared to 349 million euros in the previous year. After deduction of non-controlling interests of 1 million euros, net income was 320 million euros (previous year: 335 million euros). Earnings per preferred share (EPS) were at 0.74 euros compared to 0.77 euros in the fourth quarter of 2012. Adjusted, the figure showed a 10.6 percent increase versus prior year, from 0.85 euros to 0.94 euros. Before application of IAS 19 revised, the prior-year figure was 0.87 euros. Compared to that, adjusted earnings per preferred share grew by 8.0 percent.

In the fiscal year 2013, Henkel significantly moved forward in the implementation of its strategy for 2016. Major progress was made with respect to all four strategic priorities: Outperform, Globalize, Simplify and Inspire.

In 2013, Henkel’s three business units continued to gain market shares in their relevant markets and deliver profitable growth. This successful development was driven by focusing on top brands, powerful innovations and a clear focus on customers. The share of sales from Henkel’s top 10 brands, including Persil, Schwarzkopf and Loctite, increased to 57 percent; the target for 2016 is 60 percent. Strong product innovations across all business units were a critical success factor for Henkel. In the consumer businesses ‏(Laundry & Home Care and Beauty Care), 45 percent of sales came from products launched within the last three years. In the adhesives business, which predominantly serves industrial customers, 30 percent of sales were generated with products introduced within the last five years. In order to move its innovation processes closer to where the company sees future growth opportunities, Henkel plans to open or expand seven R&D centers in emerging markets. In 2013, Henkel opened four of these centers located in India, South Africa, South Korea, and the United Arab Emirates. The R&D center in Russia was also significantly expanded.

By 2016, Henkel aims to generate total sales of 20 billion euros – 10 billion euros in emerging markets and 10 billion euros in mature markets. Emerging markets will continue to drive global economic growth, although they are also characterized by high volatility and intense competition. Henkel has a strong foundation in many of these markets. In 2013, emerging market sales increased to 44 percent of total sales. In order to continue to successfully drive growth, Henkel intends to strengthen its existing positions, grow its businesses by expanding into new segments, and selectively enter new markets. In mature markets, the company holds leading positions with its strong brands across a broad range of categories. While sales remained almost flat compared to 2012, Henkel was able to further increase its profitability in these markets.

Henkel intends to drive operational excellence with a focus on standardizing, digitizing and accelerating its processes. In 2013, the company laid the foundation for improving its cost efficiency and competitiveness through a broad range of strategic initiatives. Henkel’s IT and its shared services have been combined within a new Integrated Business Solutions ‏(IBS) organization. This change will enable the company to advance efficient end-to-end processes based on standardized and scalable business platforms. Increasing the share of “eSourcing” has led to an improvement in cost efficiency and flexibility. In 2013, Henkel prepared the consolidation of its sourcing activities into eight global sourcing hubs. It also plans to further standardize its production and logistics processes as well as its purchasing activities across all business units and integrate them in a global supply chain organization.

Henkel’s success is built on a strong global team. Henkel employs people from more than 120 nations. Around 56 percent of its employees work in emerging markets – not only in manufacturing and supply chain, but a growing share in managerial and R&D roles. In 2013, the share of female managers worldwide increased to around 32 percent. Henkel remains committed to its goal of increasing the share of women in management positions by one to two percentage points per year. As Henkel becomes more global and diverse, it is crucial that every leader knows and understands what is expected of them. Consequently, it developed a set of clear leadership principles, which were successfully embedded in 2013 all over the world in a series of workshops for all employees with people responsibility.

Henkel expects to generate organic sales growth of 3 to 5 percent in the fiscal year 2014. Henkel anticipates that each business unit will generate organic sales growth within this range. In line with its 2016 strategy, Henkel furthermore expects a slight increase in the share of sales from its emerging markets Compared to the 2013 figures, Henkel expects adjusted return on sales ‏(EBIT) to rise to around 15.5 percent and an increase in adjusted earnings per preferred share in the high-single digits.

* When applying IAS 19 revised to the prior year, growth amounts to 12.1 percent.

This document contains forward-looking statements which are based on the current estimates and assumptions made by the executive management of Henkel AG & Co. KGaA.  Forward-looking statements are characterized by the use of words such as expect, intend, plan, predict, assume, believe, estimate, anticipate and similar formulations. Such statements are not to be understood as in any way guaranteeing that those expectations will turn out to be accurate. Future performance and the results actually achieved by Henkel AG & Co. KGaA and its affiliated companies depend on a number of risks and uncertainties and may therefore differ materially from forward-looking statements. Many of these factors are outside Henkel’s control and cannot be accurately estimated in advance, such as the future economic environment and the actions of competitors and others involved in the marketplace. Henkel neither plans nor undertakes to update forward-looking statements. 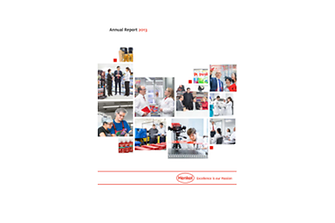 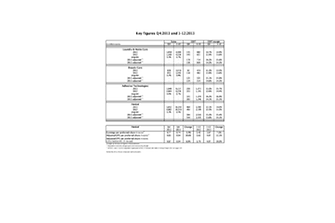