New sound deadening material is better for the environment

A trend is taking hold across the automotive industry – sound-deadening materials that can be sprayed onto car bodies by robots are increasingly replacing bitumen mats. Henkel is now introducing the fourth generation of its rubber-based acoustic materials to the market.

Teroson RB 8275 is the innovation from Henkel that is already being used at leading car manufacturers. The new product, a liquid applied sound deadener (LASD), significantly reduces the solid-borne noise generated by the engine and the wheels during driving.

“The new Teroson RB 8275 exhibits a whole series of advantages over its own predecessors and other competing sound deadening materials,” says Manfred Kosche, Henkel Product Line Manager for LASD products. Its acoustic performance is more than 15 percent higher than the current industry standard.

In addition to this, Teroson RB 8275 saves up to 20 percent weight compared with today’s standard products. Simply by switching to the Henkel innovation, car makers can reduce the weight of a vehicle by about 1 kilogram. “That may not seem much to a non-specialist, but it represents a huge step forward for a vehicle designer habitually endeavoring to save a gram here or there,” explains Kosche. Less weight means less consumption, and it provides opportunities to incorporate more safety components or comfort-improving features in the car.

The environment doesn’t just benefit from the reduced fuel consumption throughout the car’s usually years-long service life. Teroson RB 8275 is based to a large extent on renewable raw materials, which reduces the dependency on traditional raw materials such as crude oil or its derivatives.

The product can now also be delivered to car manufacturers by rail tanker cars directly from Henkel’s plant in Heidelberg. The tanks have a capacity of 21,000 liters and can be transported in an environmentally sustainable way by rail. Moreover, the container itself can be reused as often as desired, which also saves on logistic costs.

Teroson RB 8275 is, in effect, a really neat solution for customers. They no longer have to arrange for space-eating and costly logistics in their own plant, or for the transport and cleaning of the containers. Whereas the time-consuming, manual fitting of up to 30 conventional bitumen mats in each car body generates a great deal of dust and dirt, the automated spraying of liquid applied Teroson is a clean process.

Nearly all the bitumen mats used today can be replaced by Teroson RB 8275. This also helps to assure consistent quality, since spray application by robot is faster and more precise than manual bonding of mats. The new Teroson does not require any hazard labeling and the low level of emissions also lies significantly below today’s thresholds. 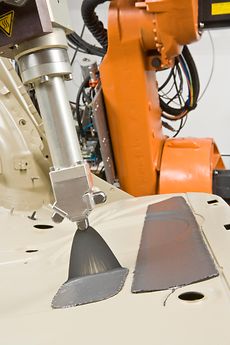 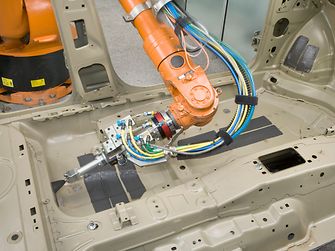 ... significantly reduces the solid-borne noise generated by the engine and the wheels during driving.

... significantly reduces the solid-borne noise generated by the engine and the wheels during driving. The acoustic performance of Teroson RB 8275 is more than 15 percent higher than the current industry standard.

The acoustic performance of Teroson RB 8275 is more than 15 percent higher than the current industry standard.