“Despite the continuing difficult market environment, Henkel had a good start to the fiscal year 2014. All our business units reported organic sales growth and improved profitability,” said Henkel CEO Kasper Rorsted. “We delivered a very strong performance in our emerging markets, while we also grew in our mature markets. However, negative foreign exchange effects had an even stronger impact on reported sales than in the previous year.”

“We do not expect the foreign exchange situation to improve in the short term,” Rorsted said, commenting on the current fiscal year. “The economic environment will remain challenging with the latest developments in Eastern Europe creating additional uncertainty in the markets. This makes it difficult to forecast economic developments for the year ahead. A high degree of agility and flexibility will remain key to success. We will therefore continue to simplify and accelerate our processes and structures.”

Despite the challenging economic environment, Rorsted confirmed the outlook: “For the fiscal year 2014, we anticipate organic sales growth of 3 to 5 percent. We expect our adjusted EBIT margin to increase to around 15.5 percent and adjusted earnings per preferred share to increase in the high single digits.”

Sales and earnings performance in the first quarter 2014

In the first quarter of 2014, emerging markets currencies in particular, but also the US dollar, remained under pressure. As a result, sales were at 3,929 million euros, 2.6 percent below the figure for the prior-year quarter. By contrast, organic sales growth, which excludes the impact of foreign exchange and acquisitions/divestments, reached 4.3 percent.

Financial result improved by 15 million euros to -15 million euros. This is primarily due to an improved net interest result as well as gains from the sale of other investments. The improvement to net interest income was due in part to the repayment of our senior bonds in June 2013 and March 2014. The tax rate was 23.1 percent compared to 24.7 percent in the prior-year quarter.

The ratio of net working capital to sales further improved to 4.8 percent. As of March 31, 2014, the net financial position showed net cash of 923 million euros, 809 million euros above the prior-year quarter.

The strong organic sales development was due primarily to the performance in the emerging markets. These once again delivered double-digit growth, with the Africa/Middle East and Latin America regions making a particularly strong contribution. Once again, Eastern Europe posted a solid increase in sales. Sales performance in the mature markets was positive overall. Solid sales growth was achieved in Western Europe despite negative market developments. Sales in North America decreased, due to a declining market and a difficult competitive environment.

The Beauty Care business unit also continued to generate profitable growth in the first quarter of 2014. At 3.0 percent, organic sales growth was once again above that of the relevant markets, leading to higher market shares. Nominally, sales amounted to 856 million euros compared to 873 million euros in the prior-year quarter.

The strong organic sales performance in the emerging markets continued. The business in Asia was the main driver, achieving double-digit sales growth. The Africa/Middle East region posted strong growth while Eastern Europe continued to show solid development. Sales increased in the mature markets despite a negative market development, increasing promotional activities and pressure on prices. Western Europe and the mature markets of the Asia-Pacific region posted solid growth. By contrast, sales in North America fell below the level of the first quarter of 2013 due to sharply intensified price competition.

The Adhesive Technologies business unit reported further profitable growth in the first quarter, once again outperforming the market with a solid organic increase in sales of 4.1 percent. Nominally, sales amounted to 1,893 million euros compared to 1,944 million euros in the prior-year quarter.

The emerging markets delivered a very strong organic sales performance, with the highest increases coming from the regions of Latin America, Asia ‏(excluding Japan) and Eastern Europe, which all experienced very strong growth compared to the prior-year quarter. Sales in the Africa/Middle East region showed solid development. Overall, mature markets posted organic sales growth, although the development varied from region to region. In North America, the extreme weather conditions encountered at the beginning of the year adversely affected the business, with production shutdowns among some customers keeping sales below the level of the previous year. By contrast, Western Europe posted solid growth. The unit’s businesses also posted strong revenue growth in the mature markets of the Asia-Pacific region.

Regional performance in the first quarter 2014

In a highly competitive market environment, sales of the Western Europe region rose by 2.0 percent to 1,450 million euros. Organically, sales increased by 2.4 percent, with the slight decline in Southern Europe being offset by growth in almost all the other countries. Sales in the Eastern Europe region amounted to 670 million euros compared to 718 million euros in the prior-year quarter. Organic growth was 5.4 percent, with Russia and Turkey being the main drivers. In the Africa/Middle East region, sales amounted to 277 million euros versus 289 million euros in the prior-year quarter. Despite the political unrests in some countries, this region once again posted double-digit organic sales growth amounting to 17.9 percent, with all the business units contributing to this development.

Within the highly competitive market of North America, sales decreased by 8.1 percent to 670 million euros. Organically, sales were 3.1 percent below the level of the previous year. This was due in particular to the exceptionally cold winter and stronger promotional competition in the consumer goods businesses. Sales in the Latin America region decreased nominally by 6.2 percent to 241 million euros. Organically, sales rose by 8.4 percent, with the businesses in Mexico and Brazil making a major contribution. In the Asia-Pacific region, sales increased by 1.4 percent to 588 million euros. The very strong organic sales growth of 9.3 percent was particularly driven by double-digit growth in China.

Nominally, negative foreign exchange effects reduced sales generated in the emerging markets of Eastern Europe, Africa/Middle East, Latin America and Asia (excluding Japan) by 3.3 percent to 1,669 million euros. Organically, these regions posted a plus of 9.2 percent, with all the business units contributing. The share of sales from emerging markets in the first quarter of 2014 declined slightly to 42 percent compared to 43 percent in the prior-year quarter due to foreign exchange effects. In the mature markets, sales rose 0.8 percent organically and amounted to 2,226 million euros.

Henkel expects to generate organic sales growth of 3 to 5 percent in fiscal 2014. Henkel anticipates that each business unit will generate organic sales growth within this range. In line with its 2016 strategy, Henkel furthermore expects a slight increase in the share of sales coming from its emerging markets. Compared to the 2013 figures, Henkel expects adjusted return on sales ‏(EBIT) to rise to around 15.5 percent and an increase in adjusted earnings per preferred share in the high single digits. 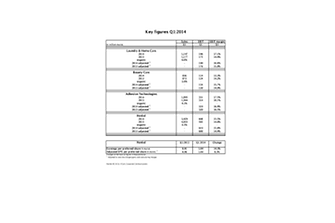 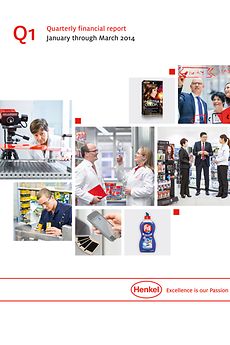 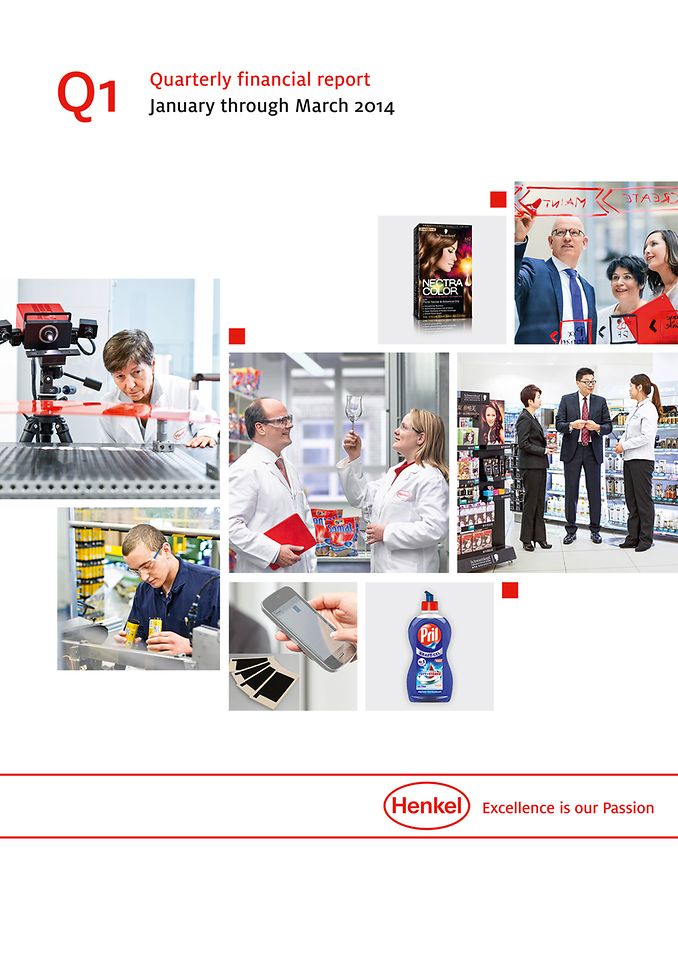