ZOW 2015: Henkel continues its innovation offensive for the furniture industry

The ZOW trade fair – as the first event on the 2015 calendar for the furniture industry and interior architecture – is a welcome occasion for Henkel to present its broad product portfolio for the various segments in furniture manufacturing in Hall 20 at stand C24. Building on the lively interest generated after its market launch in 2013 and at this year’s ZOW, the innovative Fusion Coating process for optimized manufacturing of high-gloss surfaces will be a main focus alongside reactive polyurethane adhesives for edge finishing.

The demand for high-gloss surfaces in furniture, particularly for fronts, has been growing steadily for some time and is now a global trend. Traditional methods of achieving gloss levels greater than 90% frequently entail high material or process costs. But it is quite a different story with the Fusion Coating technology developed by adhesives specialist Henkel together with its industrial partner Cefla.

Right from the day the process was premiered, Henkel has been recording increasing interest on the part of furniture manufacturers and front finishers for this new Fusion Coating method. While the official presentations at the in-house exhibition staged by Cefla in 2013 and at ZOW 2014 already drew crowds of attendees, a later presentation to 700 industry experts at Cefla Live 2014, held in the north Italian town of Imola in mid October, fueled demand even further.

Partnership with the Cefla Finishing Group

The partnership with the Cefla Finishing Group is an ideal constellation for penetrating the market with this new high-gloss technology. With this method, the UV-curing hotmelt Technomelt CHS 370 UV is applied directly to the melamine resin coating on wood-based panels. The topcoat is then applied wet-on-wet in a significantly reduced layer thickness and the composite coating is then cured in seconds under UV light. The result is not just brilliant in terms of gloss and strength of the fused coating. It offers still another trump: immediate processability in the user’s downstream operations.

Besides this game-changing technology that will be shown with a number of further options at the upcoming ZOW, taking place from February 9 to 12, 2015, in Bad Salzuflen, the hub of Germany’s furniture industry, Henkel will be concentrating especially on PUR adhesive systems for edge finishing. The reactive adhesives from Henkel allow machining of parts directly after the adhesives have been applied. Their heat and moisture resistance is far superior to that of comparable EVA adhesives. And the Technomelt PUR series of adhesives also excel as they run cleanly and are economical in use. High-gloss surfaces thanks to Fusion Coating

High-gloss surfaces thanks to Fusion Coating 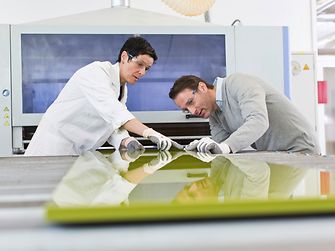 Fusion Coating is the innovative method for optimizing processes to produce high-gloss surfaces.

Fusion Coating is the innovative method for optimizing processes to produce high-gloss surfaces.