The conditions in a flue gas duct are extreme: Heightened exposure to heat and aggressive chemicals can cause the steel material to crack or fracture, resulting in leakage. In the worst case, this can lead to plant shutdowns and expensive repairs. Henkel relies on prevention rather than cure – with Loctite PC 7255. The company has treated the flue gas duct of its own power plant at the Düsseldorf site in Germany with this proven protective coating. Loctite PC 7255 is acid-resistant, has a preventive effect, and saves time and money.

Prevention rather than costly repairs

The power plant on the site of Henkel’s headquarters in Düsseldorf supplies energy to all of the site’s facilities. One of the five steam boiler units in this power plant is coal-fired. The pollutants produced by combustion, including sulfur and nitrogen compounds, have to be filtered out as best as possible in several stages. In the section downstream of the flue gas desulfurization unit there are often points at which the hot and humid waste gases can condense. They form droplets of water containing sulfuric acid which can collect and attack the steel walls of the flue gas duct unless it is adequately protected. The damaged section of sheeting then has to be replaced with a new one. In the worst case, the entire flue gas duct has to be renewed. Preventive protection against chemical attack and corrosion is therefore a top priority.

Up until now, the flue gas duct had been protected with glass-fiber composite panels. An alternative method would be to apply bromobutyl rubber. In either case, the material has to be laboriously fabricated to fit the existing geometry. Loctite PC 7255 makes the process very much easier: The protective coating simply sprays on easily and quickly, even over large surfaces or structures with bends or twists. Loctite PC 7255 is resistant to acids and alkalis and is hardwearing as well: The low-friction ceramic-reinforced epoxy forms an effective coating that protects against abrasion, corrosion and especially chemical attack.

This is how the Henkel experts tackled the task: First they cleaned the surface of the flue gas duct with a high-pressure water jet. Then they prepared the steel with a special sandblasting method to achieve a cleanliness level of SIS SA 2.5. This also had the effect of roughening the surface to a peak-to-valley height of at least 75 micrometers. The treated section of flue gas duct in the power plant at Henkel’s facilities in Düsseldorf has a surface area of around 250 square meters. “An area this size has to be treated with a temporary corrosion protection product like Loctite SF 7515 to avoid flash rusting between the preparatory work and application of Loctite PC 7255,” says Steffen Helisch, Sales Engineer Adhesive Technologies.

Loctite PC 7255 is applied in two coats with a thickness of at least 250 micrometers each, with a drying time of several hours between coats that varies according to the ambient temperature. Other methods take considerably longer. After 24 hours the treated surface is ready for walking and can bear mechanical loading. The use of Loctite PC 7255 thus saves time and money since the plant can be started up again more quickly and stays operational longer. “In tenders, our product package has been able to achieve overall cost advantages of around 17 percent over the solution with conventional corrosion protection,” says Helisch. “This advantage is the sum of product, application method and the shorter downtimes.” Since the product contains no solvents, it has cleaner bill of health than comparable products.

“Loctite PC 7255 significantly extends the lifetime of the flue gas duct,” says Axel Olschinski, assistant power plant manager at Henkel’s Düsseldorf site. “It is also a huge advantage not having to replace the old flue gas duct or having to plan and build a new 25-meter duct.” Such a replacement would not only cost between 80,000 and 90,000 euros, but also mean shutting down the unit for at least four weeks.

The product is the ideal solution for protecting equipment from mechanical wear, chemical attack and corrosion in various industries. “Whether it is used to protect flue gas cleaning equipment or to coat pumps, centrifuges and tanks, its sprayability makes Loctite PC 7255 extremely easy to use and highly efficient,” says Sebastien Monnaux, Market Development Manager Power Generation at Henkel. “We offer the product in large pails and in handy cartridges. This makes it suitable for both large and small surfaces.” 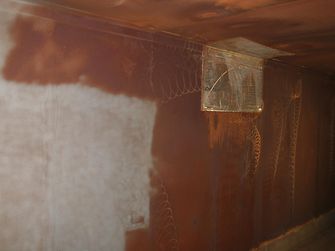 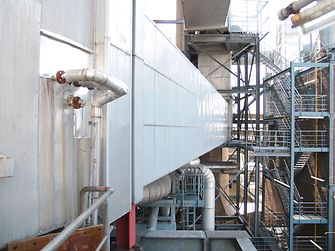 The flue gas duct viewed from the outside

The flue gas duct viewed from the outside 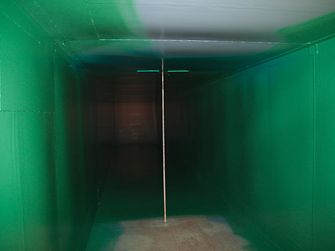