Henkel Adhesives at the European Championship in soccer

Adhesive Technologies in the game

As of last Friday, the lives of millions of people around the world have turned to focus on soccer for four weeks. Over 100 years ago, a leather ball was all you needed to play soccer. Today, it is the most popular sport in the world, and a big event like the current European Championship in soccer in France would be unthinkable without modern technology and a massive infrastructure. With its many materials and solutions, Henkel plays a part. Whether for soccer cleats, the team bus or even the stadium itself – as the leading solution provider for adhesives, sealants and functional coatings worldwide, Henkel is an important teammate.

The soccer ball is at the heart of the game – but what’s at the heart of the ball? Often, a professional soccer ball is made up of connected panels that protect two layers of internal lining and an inflatable bladder. While soccer balls were traditionally hand-sewn, today fewer panels can be used on a soccer ball and can be glued on, making the ball lighter and easier to handle. Henkel provides a range of solutions for joining textiles, leather and various other materials, and offers additional innovative solutions to manufacturers.

High-quality soccer balls can be made with modern plastics and synthetics in which the panels are bonded together. The seamless surface produced gives the ball maximum wear resistance, improves its flight characteristics and reduces water absorption on wet game days.

It’s not just the fans who follow their soccer teams wherever they go during the European Championship – the team bus is a constant companion, bringing the team from one game to the next. At first glance, you can see that most of the national teams’ busses are decorated with slogans, logos and graphic foils that are applied with temperature resistant and pressure sensitive adhesives ‏(PSA). The adhesives are added to the thin tapes and plastic foils, which can then be easily and evenly applied to large surfaces. For these procedures, hot melt, UV-curable and water based technologies are used – adhesives which are resistant and resilient, no matter the weather.

What isn’t visible to the naked eye are the up to 250 kg of adhesives that are used to install the expansive panorama windows of a bus. Thanks to a newly developed polyurethane-based product by Henkel, the weight of the adhesives used can be reduced by up to 20 percent, lowering the fuel consumption of the bus and reducing its C02 emissions. As a key partner in the development, manufacture and maintenance of vehicles and transportation systems, the automotive industry can profit from high performance adhesives, sealants and functional coatings by Henkel. Conventional welding of auto parts is increasingly being replaced by multi-substrate bonding and design technologies, making cars and vehicles lighter in weight.

Agility, speed and skillful ball handling are the most important assets for today’s soccer players. Soccer gear has evolved to support these skills in order to help players perform at their highest potential. Today, for example, soccer cleats are glued rather than sewn, making the shoe lighter, more flexible and better able to support the natural motions of the body.

As a supplier to countless athletic gear manufacturers, Henkel is present with its adhesives during each step of the shoe-making process. Soccer cleats are made of several separate components that need to be bonded: the outer material, layers of the shoe’s inner fabric, insoles, midsoles, toe caps, heel reinforcements, and foam pads in the shoe. Henkel offers a range of solutions to meet the specialized challenges of shoe bonding. Soccer cleats include both solvent adhesives and water-based hot melt adhesives.

What would soccer be without the stadium? The countless fans and the atmosphere they create make soccer more than a sport: It’s an event. At the European Championship in France this year, the opening and the finals of the competition will take place in the sixth largest soccer stadium in Europe: the Stade de France in Paris.

Stadiums around Europe are built using construction adhesives such as those Henkel offers. Ceresit, Loctite and Thomsit are among the brands used for the flooring and for the sealing of the roof and main body of many stadiums. Henkel’s innovative portfolio offers a line of products that ensure the efficiency and structural reliability of buildings.

Stadium floodlights light up the field to give the audience a great view. Many of today’s soccer stadiums have also become architectural feats, sometimes even illuminated by colorful lights, like for example, FC Bayern Munich’s stadium. An increasing number of lighting applications are using light emitting diodes ‏(LEDs) which have become the leading technology for lighting solutions globally.

As a key supplier and partner for manufacturers of lighting devices around the globe, Henkel Adhesive Technologies offers a range of solutions for lighting applications under high-performance adhesives and sealants brands such as Loctite, Bonderite and Technomelt.

Stadiums also have large screens and animated advertisement banners by the soccer field as well as loud speakers. The demand for high-performance, ultra-thin light displays is rising, driving new advances in display materials technology for a variety of applications. For LED and OLED displays, both which have unique manufacturing requirements, Henkel offers solutions for specialized sealants, electrically conductive adhesives and inks.

Soccer is emotional, and we love to share the excitement of the game with our family and friends with the help of our mobile phones. Henkel is a part of this too – up to 50 different products and solutions by Henkel can be found in a single smartphone.

This year’s European Cup is taking place in the middle of summer. With temperatures rising, refreshing beverages will help you keep your cool during the excitement of the games. For example, a chilled beer or a soda might quench your thirst. Many labels on the glass and plastic bottles of well-known beverage companies are glued on with adhesives by Henkel. With the Aquence XP adhesive, Henkel has developed a casein-free adhesive for glass labelling that ensures increased efficiency and a high bond strength, while enabling a simple recycling process through fast and easy removal.

In collaboration with a leading packaging manufacturer, Henkel has developed a tailor-made hot melt adhesive that ensures a lower adhesive consumption and meets the high demands of food safety. The hot melt adhesive is used to attach carton caps and straws and for the bonding of secondary packaging applications.

Even cans are produced with the help of Henkel solutions. The Bonderite product portfolio can be used in all areas of can manufacturing. 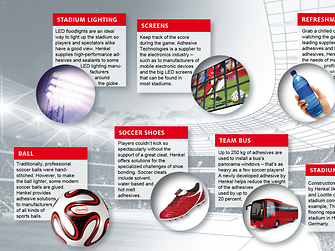