The UK company Rexam PLC, the world’s biggest beverage can manufacturer, has chosen Henkel for its “Quality Award”, conferred as part of its annual “Supplier Excellence Awards” scheme. Rexam’s decision is in recognition of the extensive efforts made by the world market leader in adhesives, sealants and functional coatings to consistently supply products and processes of the highest quality. 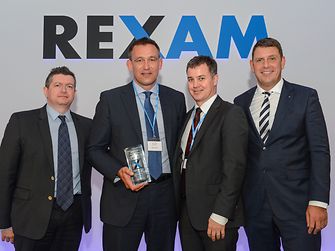 With 60 billion beverage cans produced each year – primarily for the European and North and South American markets – Rexam PLC is not only the market leader in this segment but also one of the world’s largest manufacturers of food packaging per se. And Rexam is also the biggest customer served by Henkel’s Metal Packaging business unit.

This is the eleventh year in which the beverage can manufacturer has conferred its "Supplier Excellence Awards" to underline the high importance it attaches to its vendor relationships. The “Quality Award” announced in mid March recognizes the outstanding success of Henkel’s quality management team in ensuring that not a single quality problem has been encountered in Henkel products supplied over the last five years. Rexam introduced a KPI in 2009 representing the product-specific quality problems occurring in relation volumes supplied by its vendors. Henkel executives Mark Sowerby and Kevin Meagher were at the gala ceremony in Hertfordshire near London to receive the awards from Alex Jennings, Rexam Chief Procurement Officer. In his address, he said: “Henkel has received the ‘Quality Award’ for consistently sustaining its level of world class performance. Regular production plant visits and monthly reporting enable the team to identify potential issues and take a productive approach to solutions.”