The Japanese government has decided to use new multi-ply bonded CLT panel construction technology to make the nation’s buildings more earthquake-resistant – after a visiting delegation met with experts from Henkel Adhesive Technologies. 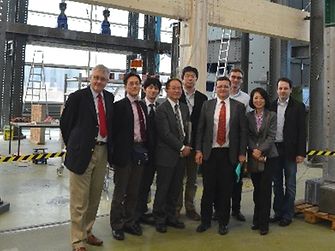 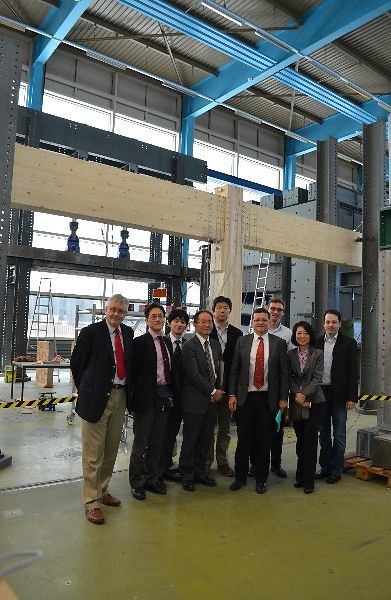 The visit was hosted by representatives from the Purbond brand, which will soon become Loctite. The four-member delegation of scientists from the central Japanese Forestry and Forest Products Research Institute ‏(FFPRI) were sent on a fact-finding mission by the Japanese government, and spent six days gathering information on production, development and standardizations of Cross-Laminated Timber ‏(CLT) panels. Purbond co-developed this increasingly popular building technology 15 years ago in cooperation with leading European producers of glue-laminated ‏(“glulam”) timber construction elements. Since then the brand has actively built a market for CLT. The process involves assembling coniferous wood boards measuring up to four meters wide and 15 meters long into elements of up to seven layers, before cross-laminating them with Purbond adhesive applied over the entire contact area.

Individual CLT panels can be up to 30 centimeters thick, and offer huge advantages as wall, floor or roofing elements, particularly in buildings located in areas with high risk of earthquakes and high levels of seismic activity. CLT panels have a far lower mass than concrete, which means they are significantly more effective in absorbing the kind of structural shock caused by earthquakes. The Japanese scientists were taken to several production facilities to gain insights into the processes involved in manufacturing CLT panels. They also held discussions with leading timber construction experts in Switzerland at the Eidgenössische Technische Hochschule ‏(ETH University) Zurich and in Austria at the Graz University of Technology, and visited completed and currently running construction projects for apartment building complexes, shopping centers, and the new “Elephant House” in Zurich Zoo.

The visits left the delegates in no doubt about the strength of this technology. In the next two years, the Japanese government intends to implement a structural design and static analysis standardization program corresponding to the “Eurocode 5” series of standards governing application of CLT panels in the European construction industry. A Purbond customer from Austria has already completed an initial pilot project with CLT in Japan, and a second construction is planned in May. This shows the ongoing expansion of CLT panel technology that has gone from strength to strength over 15 years: After its launch in Europe, the technology was rolled out in North America – and now Japan will be the next place to benefit from this leading solution from Henkel Adhesive Technologies.