Henkel is demonstrating social responsibility and at the same time building its employees’ team spirit with an exceptional undertaking: Yesterday 20 Henkel employees from the company’s headquarters in Düsseldorf flew to Romania where they will be building a house for a large family in difficulty. Their voluntary efforts are being supported by the company. 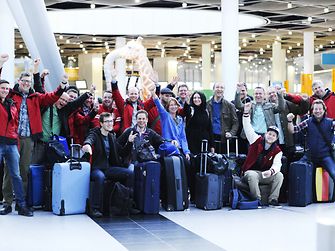 Henkel’s team of volunteers will take just a week to build a new home for the family of seven in the Romanian city of Ploieşti. With their house having been declared “due for demolition” by the local authorities, the family is currently living in a 100 sq. ft. container.

The Henkel employees have generated much of the money required for the aid project themselves through ambitious fundraising events such as company fun runs and Christmas or Easter events. Financial support was also received from the Fritz Henkel Foundation. “The project provides us with an excellent opportunity to assume social responsibility since it relies largely on the commitment of our colleagues – and they have put a great deal of personal effort into organizing the operation,” says Dr. Andreas Bruns, President of Henkel Germany and Head of Infrastructure Services. “We are delighted to be able to help this family, which has been struck by a series of personal blows, and especially to be finally getting stuck in on the ground,” adds Christian Wallendschus of the team of volunteers.

The Romanian family, which includes four children and one grandchild, is living in extreme poverty and has just ten square meters or one hundred square feet of living space. Assisted by Romanian helpers, the 20 Henkel employees will build decent new housing for the family within the space of just a few days. The Henkel employees are from the Infrastructure Services division and can contribute a wide variety of professional skills which will come in useful when laying floors, putting up walls, installing windows and doors, and building the roof.

About the Fritz Henkel Foundation

Social engagement has always played an important role at Henkel and is an integral part of its corporate culture. Founded in 2011, the Fritz Henkel Foundation has close links with the company and underscores Henkel’s longstanding commitment to social involvement that goes beyond its business interests. In 2013, Henkel and the Fritz Henkel Foundation supported 2,422 projects with donations totaling around 7.9 million euros.

About CSR and volunteer work with Habitat for Humanity

Habitat for Humanity is an international, nondenominational, nonprofit organization that helps families in need worldwide by building houses, very much in line with the principle “Help people to help themselves.” A key aspect of its work is that companies and individuals can participate in a large number of aid projects as local volunteers. The volunteer program enables companies to combine social responsibility with a unique team experience and a learning opportunities for the participants. Since the organization was established 37 years ago, volunteers have helped to provide new homes for 800,000 families in around 70 countries on all five continents. Habitat for Humanity also has a high level of expertise in disaster response and aid provision, although volunteers are never placed in disaster areas. Habitat for Humanity’s most famous supporters include Jimmy Carter, Jon Bon Jovi, Brad Pitt and, in Germany, Hans Eichel, Daniel Libeskind and Alexandra Neldel.