Strengthening education through art and music

Thanks to the MIT initiative, the Santo Domingo Savio school of San Isidro in Argentina has a new space for art education, an essential aspect in children´s development. The renowned artist Milo Lockett joined the project and painted a mural with kids at the entrance hall leading into the room. 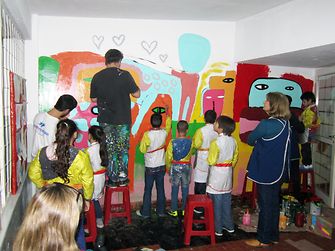 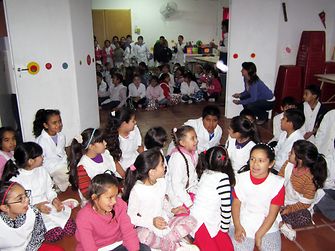 Students prepared a special song for the opening ceremony. 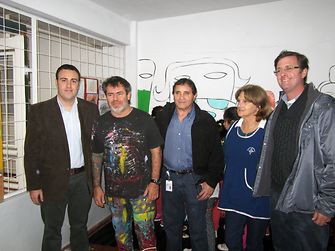 Henkel representatives with Milo Lockett and officials of the school´s Board of Governors.

Students prepared a special song for the opening ceremony.

Henkel representatives with Milo Lockett and officials of the school´s Board of Governors.

As the school only had one classroom for all its curriculum activities, it became almost impossible to provide students access to all the resources they needed. Upon learning of this difficulty, Luis Vázquez, Development Assistant in the water-based adhesives laboratory, who already had strong links with the school, immediately submitted an MIT project application for the repair and overhaul of a further space. “This will create an ideal environment for encouraging musical and artistic expression in children, and for keeping the materials they need readily available,” says Luis.

On the day of the inauguration of the art room, Santo Domingo Savio School was full of music, color and, especially, joy. The emotional inauguration ceremony began with a song sang to teachers, school officials and representatives of Henkel Argentina by a student choir, with voices being added as they discovered each new aspect of the room.

After that, children had the opportunity to decorate the room hall with the help of famous artist Milo Lockett, who was kind enough to contribute his genius as a final addition to this beautiful and colorful project.

Social engagement has been a special part of Henkel’s corporate culture ever since the company was founded in 1876. With the Make an Impact on Tomorrow ‏(MIT) initiative, Henkel supports the volunteer work of its employees and retirees all over the world, who have demonstrated their commitment to helping other people in more than 10,000 MIT projects in 50 countries.