Investment in laboratory and engineering facility 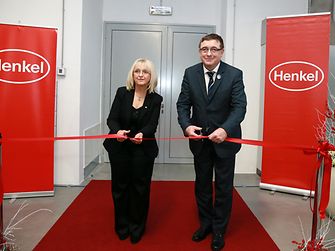 Director of Henkel Maribor, Melita Ferlež, and the mayor of Maribor, Andrej Fištravec, at the opening ceremony.

Director of Henkel Maribor, Melita Ferlež, and the mayor of Maribor, Andrej Fištravec, at the opening ceremony.

“Today Henkel Maribor is one of Henkel Beauty Care’s most important production sites as well as the technical competence center for R&D, packaging, planning and microbiology. We made this investment because doing well is not enough, we needed to exploit our full potential,” said Melita Ferlež, Director of Henkel Maribor, at the opening ceremony. “With more than 550 employees, we produced 45,000 tons in volume or about 265 million pieces of cosmetic products in 2013. So Henkel has multiplied the volume of the plant by 12 since its beginning in 1990. We cover Hair, Body, Skin&Oral Care categories with our main brands Schwarzkopf, Palette, Taft, Syoss, Fa, Le Chat, Neutromed, Vademecum, AOK and Diadermine. We supply more than 30 countries around the world.”

Henkel Maribor was granted the Authorized Economic Operator ‏(AEO) status during the ceremony. “My pleasure is even greater as I have the opportunity to announce to you and all your staff today that you have obtained the AEO status, which is currently the highest status by the Customs Administration that can be granted to a company in the European Union,” said Dušan Šafarič, Director of the Customs Administration Maribor. “This status brings benefits in the form of facilitated customs checks, which are related to safety and security, and simplifications in accordance with the customs regulations to economic operators meeting the conditions and criteria. Gaining this status is a logical continuation of the work on simplified customs procedures that has been applied consistently at Henkel Maribor for over a decade.”

Andrej Fištravec, the Mayor of the Municipality of Maribor, attended the opening ceremony. "We wish to have more successful companies such as Henkel in Maribor,” Fištravec said. “This successful company with its socially responsible behavior contributes a lot to Maribor’s community, whether it comes to the sponsorship of cultural and sporting events or the support in case of natural disasters."