The winners of the Best Use of Adhesive Awards of the WHZ University ‏(Westsächsische Hochschule Zwickau) were recently given the opportunity to meet leading adhesives experts and present their winning project at the Henkel Technology Center in Garching. 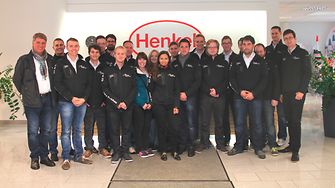 The celebratory occasion organized for the successful young engineers has become something of a tradition at Henkel. The celebratory occasion organized for the successful young engineers has become something of a tradition at Henkel.

The annual celebratory occasion organized for the successful young engineers has become something of a tradition at Henkel. Now in its fifth year, the Best Use of Adhesive Award is a special honor conferred annually by the General Industry ‏(AG) SBU of Henkel Adhesive Technologies as part of the global “Formula Student” engineering design competition. This requires participating teams to design, develop and market the prototype of a new racing car. Lightweight construction is also now playing an ever more crucial role in this competition. Modern adhesives and sealants are therefore becoming increasingly important as key components, not just for the bodywork but also for the suspension, chassis, engine and transmission system. Henkel honors the best solutions and the best presentation with this special award.

“The professionalism with which these young people have applied their already extensive expert knowledge and the manner in which they presented their concept in Garching left everyone in the audience thoroughly impressed,” says Rudolf Neumayer of Application Engineering, AG Europe. This shows just what Henkel’s involvement in the promotion of such young talent can achieve.

Six years ago, adhesives were still being largely applied by trial and error. Now, the winning team from Zwickau has more than 400 adhesive-bonded joints in its electric-powered speedster. “The know-how gained is now being utilized in university teaching and passed on to each new generation of participants,” says Neumayer. Knowledge transfer related to the significance of adhesives and sealants for future engineering developments throughout industry has therefore become self-perpetuating. This initiative is of particular value because many talents who take part in Formula Student end up in the engineering and design departments of manufacturing companies. Or they move straight on to forming their own start-ups, as was the case with one winning team a couple of years ago. That company is currently developing and marketing a drive system for upgrading standard bicycles to e-bikes.