Starting a career at Henkel China

Where do you find young and ambitious talents for your company? – Straight at university. Through on-campus promotion, Henkel China finds driven students and offers them attractive entry positions to start a successful career. 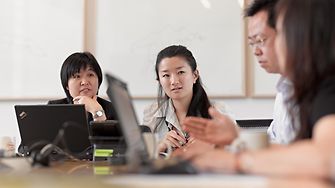 To get in touch with young talents, Henkel China has developed an annual campus promotion program. A key part of this program are campus talks, which give the students the chance to directly approach the company. In 2014, Henkel hosted these informative talks in major cities in the region, including Shanghai, Beijing, Guangzhou and Chengdu. Thanks to the program, the company has built a solid talent pipeline, hiring Management Trainees directly from university.

“Campus talks are the best bridge for us to understand Henkel and to promote campus recruiting. They helped shape my understanding of Henkel’s IT department,” said Jason Liu, Henkel Management Trainee, who graduated from Shanghai Jiao Tong University, as he recalled his first interaction with Henkel. “The talk presented by the department’s Director of the Asia-Pacific region was fascinating and led to my interest in the area.”

Today, Jason Liu is undergoing a variety of centralized trainings at Henkel to further improve his skills in multiple areas. He is also being mentored by superiors from different management levels to further develop his career by building a strong network.

As a Management Trainee in the last phase, Adele Zhang chose to work for Henkel Beauty Care’s e-commerce division after her job rotation within the program. “The two year Management Trainee Program had far-reaching significance for my career development, not only by broadening my way of thinking about the business, but also in improving my soft skills in areas such as sales and marketing,” she said, reflecting on the most valuable experience she gained as a trainee.

“I was most impressed by the fact that relevant department heads and managers always took the time to evaluate my performance together with me in the middle and final stages of each rotation to help me grow quickly through face-to-face communication and targeted instructions,” added Zhang.