Lending a helping hand to those in need

Many people in the Yangwei Village in southern China lost their homes because of natural catastrophes. To rebuild the villagers’ houses, Henkel employees teamed up with members of the Habitat for Humanity organization.

The Yangwei Village, a tangerine farming community, is located two hours outside of Guangzhou, China. Most villagers do not make enough money during the harvest season to re-construct their destroyed homes. Floods and typhoons continue to regularly affect the area and therefore houses need to be rebuilt in a steadier manner. 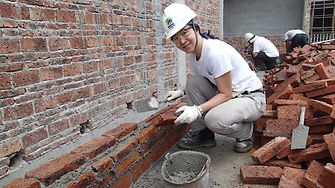 In the interview, Junko Usuba from Henkel’s Asia-Pacific Strategy Group, talked about her participation in the Yangwei Village Project. In the interview, Junko Usuba from Henkel’s Asia-Pacific Strategy Group, talked about her participation in the Yangwei Village Project.

One of Henkel’s volunteers, Junko Usuba, from the company’s Asia-Pacific Strategy Group, strongly believes that building better homes is a step towards helping break the cycle of poverty. We sat down with her to talk about what motivated her to toil in the sweltering heat to rebuild strangers’ homes.

How did you get involved with this project?

I found out about the project through Habitat for Humanity, where I have been a volunteer since 2006. When my husband and I first moved to China, we were very interested in exploring the rest of the country. We also thought that it would be wonderful if we could do a volunteer trip, so we reached out to Habitat for Humanity. The organization was incidentally searching for volunteers for a project in Guangdong Province. That’s how we found Yangwei Village. Together with other employees and Habitat for Humanity members, Usuba helped building one of the new housing areas in Yangwei Village. Together with other employees and Habitat for Humanity members, Usuba helped building one of the new housing areas in Yangwei Village.

Describe your role in the project.

I mostly did physical work on the project! One thing that’s great about Habitat for Humanity is that they have something called “Sweat Equity.” So the benefactors not only donate money for the housing, they also provide physical work and sweat. By doing this, the personal bond between the volunteers and the beneficiaries gets even stronger. We were out there in 36-degree weather, carrying tools, mixing concrete and shoveling sand. Sometimes the villagers would need things to be carried to the second floor, so we formed a human chain. Wherever a hand was needed, we would support.

The landslides in the village are very dangerous which is why the villagers had moved children and families to a neighboring community. It was more the adults that we worked with, and the Chinese migrant workers, who go from village to village to find work. First of all, the villagers are very friendly, and there are a few houses that haven’t been fully demolished, so some people still have their homes there. Every time we passed by, they would grab us and invite us for tea. They always made sure we were well fed.

What was one of your most memorable moments during the project?

For me, it wasn’t necessarily the big moments that were memorable, but rather the villagers’ small, kind gestures. I befriended one of the older ladies there who told me about how her family members went to the factories to work. She missed them a lot, and she didn’t know how they were doing. She then served me a bamboo dish like the one my mom would make for me in Japan. So I sensed the similarities, and I told her that this was similar to what my mom made for me in Japan, and so I called her my “Chinese mother,” which got her very excited. It’s those little connections that you form that have an impact on your life.