After disaster strikes, infrastructural damage and the challenge of rebuilding remain. According to the 2014 World Risk Index, which assesses countries’ disaster risk, the Philippines is the second most at risk country worldwide, based on its natural hazards, susceptibility, coping capacities, and adaptive capacities. Henkel employees added to the Philippines’ coping capacities by volunteering at several projects. They supported their communities by reconstructing houses, setting up a computer lab at a storm-damaged school, and donating school supplies to give children at Christmastime. 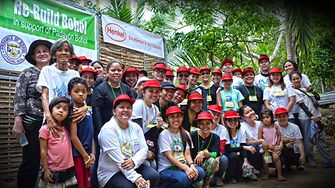 In collaboration with the international non-profit organization Habitat for Humanity, Henkel funded the reconstruction of houses on the earthquake-stricken island province of Bohol, where an October 2013 earthquake killed or injured over one thousand people and caused vast infrastructural damage. The local government in Bohol matched Henkel’s donation and 42 Henkel employees volunteered at the house-rebuilding project. Twelve houses were built as a result.

A team of Henkel employees from the Corporate Social Responsibility committee and IT department pitched in to help in the typhoon-ravaged city of Tacloban. Typhoon Haiyan struck Southeast Asia in early November 2013, devastating the central Philippines and leaving more than 7,000 people dead or missing. The Henkel volunteers set up a computer lab at a badly storm-damaged school in Tacloban. They also installed solar panels to help the school reduce its electricity consumption, simultaneously contributing to sustainability and lower energy costs.

Henkel employees from all departments filled shoe boxes with school supplies for less fortunate children for the “My Dream in a Shoebox” project. Children received a gift of school supplies at Christmastime, which spread joy while stressing the importance of education. A total of 1,094 shoeboxes were collected, a record for the Henkel team since they began participating.