Global beverage can manufacturer, Rexam PLC, recently awarded Henkel for “Excellence in Supply” at its annual Supplier Awards for Europe and Africa, the Middle East and Asia. Henkel, the leading solution provider for adhesives, sealants and functional coatings worldwide, was recognised for its high quality standards, reliability and on-time delivery. 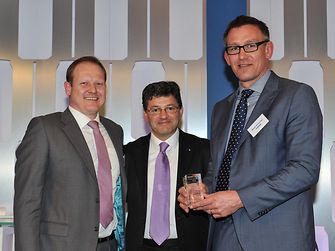 The formal ceremony took place in Hertfordshire, just outside London, where Henkel managers, Mark Sowerby and James Timperon, received the award from Alex Jennings, Rexam’s Chief Procurement Officer, on behalf of the company.

Alex Jennings had nothing but praise for Henkel: “Over the past seven years, Henkel has performed consistently well in the area of supply. They deliver when they say they will deliver and are always willing to step in to the breach when other suppliers let us down. We know that we can rely on them. As a result, Henkel was nominated by a number of plants for this award.”

Producing around 64 billion beverage cans each year, Rexam is the largest can maker in Europe and South America. For Henkel’s metal packaging division, Rexam is its largest customer. The lubricants and cleaners marketed under the Bonderite brand are used all over the world, supporting Rexam in accelerating their production processes and improving cost efficiency.