In 1964, Henkel’s factory in Montornès del Vallès was inaugurated at the Riera Marsà industrial complex, the first one in Spain to incorporate residential dwellings, shops and a common purifying plant shared with other companies. The factory began by producing detergents and washing powder, and started its adhesives production 12 years later. 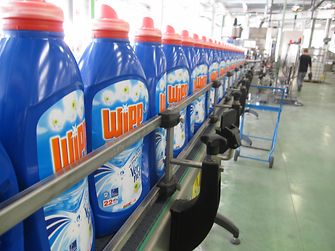 Production of the laundry detergent “Wipp” in Montornès. Production of the laundry detergent “Wipp” in Montornès.

“Our current production site in the Iberian Peninsula has become one of Henkel’s top factories due to the modernization of its facilities and a significant investment in order to integrate some product lines that were produced in other factories before,” said Jordi Juncà, plant manager of the Montornès site.

The facilities occupy a total industrial area of more than 100,000 square meters; 60,000 of them are occupied by the detergents part, and 40,000 by adhesives. The total amount of production reaches over 200,000 tons, including washing powders, washing liquids and adhesive technologies. Nearly 500 employees are working in the factory, which exports to more than 50 different countries.

“The factory in Montornès is particularly unique as it has a very diverse mix of products that allows us to fill a six millimeter aluminum tube to 24 tons tanks. We have a factory which is able to quickly adapt to our customers’ demands. That is why we always have capacity available for very specific production demands,” said Jaime Anguera, plant manager of the Adhesives part in Montornès.

In 2015, Henkel Iberica celebrates the 50th anniversary of the Montornès plant production which was recently recognized by Laundry & Home Care among the top 3 powder detergent plants in 2014. In addition to that, the Montornès site is the site with the most competitive costs in its region. To celebrate its successful development, many internal and external activities have been scheduled throughout 2015.

One of the most remarkable activities carried out was the Open House for all of the factory staff. Several workshops and guided tours took place. “It was a very special day and much appreciated by the over 800 attendants, including workers and their families. It has been a great opportunity to organize this kind of event for such a special occasion,” said Juncà.