Eva Janssen, an 18-year-old from Hamburg, was among the cheering fans of the German women’s soccer team last night. The young girl won a Henkel social media contest during this year’s women’s soccer world cup. As a premium partner of the German national team, Henkel organized a raffle in partnership with online newspaper BILD.de to win an exclusive trip to Croatia for the European Championship qualifying match. 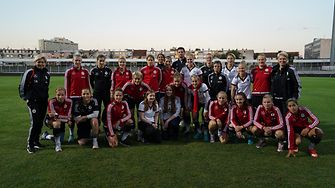 During the training sesssion before the game against Croatia. The two young girls from Hamburg were delighted to spend three days with their team. During the training sesssion before the game against Croatia. The two young girls from Hamburg were delighted to spend three days with their team.

Fans were asked to post their best cheering picture on Twitter, Tumblr or Instagram with the #CheerForYourTeam. The radiant winner Eva Janssen and a friend re-enacted a scene where German attacker Anja Mittag and defender Annike Krahn celebrate their 4-1 victory in the World Cup’s Round of 16.

The two young women from Hamburg were on a special flight to the Croatian capital of Zagreb with the team. After a Segway tour through Zagreb, they attended the team’s last training session before the match. Yesterday was the highlight of the trip: the winner and her friend saw the German team win 1:0 against the Croatian team.

“After these wonderful few days in Croatia, we are going back to Hamburg with very special memories,” said Janssen. “Seeing the players every day and getting a glimpse of their daily routine was quite an experience! We won’t forget the friendliness and the openness of the team and the coaching staff. Thanks to Henkel for making this trip possible!”