Official opening of the kindergarten in Bratislava

A big plus for Henkel employees

Carsten Knobel,CFO and Member of the Board, accompanied by Zuzana Halkova, Corporate Vice President Human Resources Europe, and Christian Schulz, new President of Henkel Slovakia and Head of Shared Service Center ‏(SSC) Bratislava, officially opened Henkel’s kindergarten in Bratislava this month. This facility, which has been operational since September, helps improve the work-life balance of Henkel employees returning to work after a parental leave. 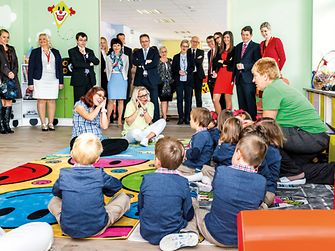 The children welcome the guests with a song 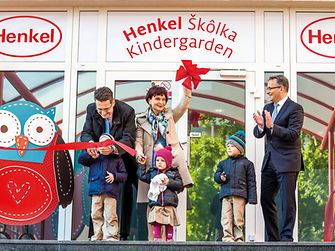 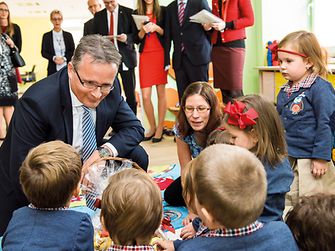 Carsten Knobel discusses with the children of the kindergarten 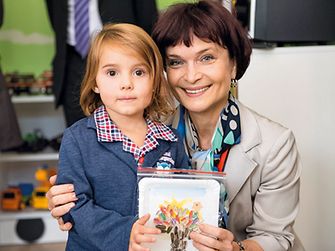 The children welcome the guests with a song

Carsten Knobel discusses with the children of the kindergarten

Joined by representatives from the Ruzinov borough, the German embassy in Bratislava and the leading SSC forum in Slovakia, Carsten Knobel and Zuzana Halkova toured the new premises and discovered what the children had learned in their first month at the kindergarten. Henkel’s kindergarten in Bratislava is the company’s first in-house facility outside Germany, proving how important Bratislava is for Henkel. The initiative strengthens the company’s position as an attractive employer in Slovakia.

"Bratislava has evolved into a center of expertise, providing a wide range of high-quality services across all business units and functions. In order to continuously develop our organization, it is important to create optimal conditions for our employees,” Carsten Knobel stressed during his opening address. “In this respect, the newly opened kindergarten greatly enhances Henkel’s attractiveness in the local marketplace.”

Henkel currently employs more than 1,500 people, with an average age of 29, in Bratislava. When returning to work from maternity or parental leave, many employees have to make arrangements for their children to be looked after during the day. “With the opening of a kindergarten on Henkel premises, our employees can be certain that their children are well taken care of while they are at work,” said Zuzana Halkova. “The facility also helps us stay ahead of the competition.”

The first Henkel kindergarten opened in 1940 at the company’s headquarters in Düsseldorf. Hundreds of children have been looked after there since, and some of those children are even working for Henkel now. The kindergarten in Bratislava is Henkel’s fourth in-house childcare facility. Located on the company’s premises in Bratislava, the kindergarten can welcome up to 100 children from age two. “The opening of this company childcare center underlines our clear commitment to helping people reconcile work and family life. I am delighted at the additional support this facility provides for our people,” said Christian Schulz.