Henkel is paying out a record dividend

Henkel AG & Co. KGaA’s Annual General Meeting saw all resolutions on its agenda passed by the voting shareholders. A total of around 1,400 shareholders attended the event, which was held in Düsseldorf on April 8, 2019.

As proposed by the corporate bodies, the Annual General Meeting approved a 3.4 percent higher dividend per preferred share of 1.85 euros ‏(previous year: 1.79 euros) and a 3.4 percent increased dividend per ordinary share of 1.83 euros ‏(previous year: 1.77 euros). For both share classes this is the highest dividend ever paid by Henkel. The dividend payout ratio amounts to 30.9 percent of net income after non-controlling interests and adjusted for exceptional items. The total dividend payout amounts to 805 million euros.

Since 2012, Henkel has distributed nearly 4 billion euros in dividends to its shareholders. In the same period, the dividend per preference share almost doubled from 0.95 euros to 1.85 euros. Henkel will continue to focus on offering attractive returns to its for shareholders. Therefore, the company has increased the target range for the dividend payout ratio to 30 to 40 percent of adjusted net income after non-controlling interests from fiscal year 2019 ‏(current range: 25 to 35 percent). 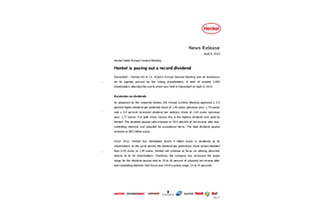