Henkel looks back on successful 30 years of sustainable development

Henkel today published its 30th Sustainability Report, detailing its achievements and progress in the area of sustainability.

“For us, at Henkel, sustainability is not only part of our long-standing tradition, but also an integral element of our strategic agenda for Purposeful Growth. In 2010, we defined our long-term sustainability strategy and targets up to 2030. And we are proud of the progress we have made since then. We achieved most of our targets, and even exceeded some of them,” said Carsten Knobel, CEO of Henkel. “Through sustainable innovations in our consumer and industrial businesses, we aim to create outstanding value to exceed the growth of our markets while strengthening our leading role in sustainability.”

“The global pandemic in 2020 has brought many new challenges. Nevertheless, together with our passionate teams across the globe, we have managed to drive our sustainability agenda forward, especially with regard to our three key focus areas: becoming a climate-positive company, enabling a circular economy and increasing our positive social impact. Our efforts have resulted in great achievements, both on company level and across our entire portfolio of products and technologies,” added Sylvie Nicol, member of the Henkel Management Board responsible for Human Resources and Sustainability.

Committed to leadership in sustainability

In 2010, Henkel defined a long-term sustainability strategy until 2030, underpinned by concrete targets and objectives. These strategy and targets have been constantly refined and further expanded since then. The cornerstone of the strategy is the ambition to create more value with fewer resources – to enable a growing world population to live well, while at the same time reducing the global footprint.

2020 marks the mid-term on the way towards 2030. Over the past decade, Henkel achieved significant progress across all dimensions of its sustainability strategy: Overall, the company was able to reduce its environmental footprint by 39 percent across three dimensions – CO2 emissions, waste and water – significantly exceeding the target of a 30 percent reduction for 2020. In addition, by reducing the global accident rate by 50 percent, Henkel was able to achieve its safety target for 2020.

Henkel published its first sustainability report in 1992. This makes Henkel one of the few companies in its industries as well as in the German DAX environment that can proudly look back at 30 years of consistent sustainability reporting. The first report was named “Environment Report” and covered, among others, Henkel's principles of environmental protection. “Since then, Henkel’s reporting and sustainability strategy evolved considerably. Today, we address a wide range of topics that are important for our stakeholders and for the future success of our business. They range from safeguarding social and environmental standards in our supply chain to driving progress towards a climate-positive company,” explained Uwe Bergmann, Head of Sustainability Management at Henkel.

To reduce CO2 emissions and limit global warming, Henkel pursues its long-term vision to become a climate-positive company by 2040.

The company has the ambitious target to reduce the carbon footprint of its production by 65 percent already by 2025. Energy efficiency will be continuously improved and only electricity from renewable sources is to be used by 2030. In March 2020, the Science Based Targets Initiative ‏(SBTi) confirmed that Henkel’s emission reduction goals meet the requirements for achieving the targets set by the Paris Climate Agreement.

Another milestone in 2020 was the conclusion of a large-scale Virtual Power Purchase Agreement ‏(VPPA) for a new wind farm in Bee County, Texas. This will cover 100 percent of Henkel's electricity demand in the US in the long term.

In addition, Henkel wants to leverage the broad reach of its brands and technologies across the globe to help customers, consumers and suppliers reduce their CO2 emissions. Having already enabled them to save more than 55 million tons in the 5-year period up to 2020, the company strives to reach the target of 100 million tons by 2025.

Henkel is also actively promoting the development of a circular economy and is pursuing ambitious packaging targets. The goal by 2025 is that 100 percent of Henkel's packaging will be recyclable or reusable.* At the end of 2020, the company had achieved this for around 89 percent of its packaging.

The company is working steadily to increase the proportion of recycled material in its packaging. While many of its brands already offer products with packaging made from recycled material, the company aims to increase the share of recycled plastic to more than 30 percent for all consumer goods products worldwide by 2025. At the end of 2020, this proportion was around 15 percent.

Tackling social inequality is one of the biggest global challenges of our time. The Corona pandemic has even increased this, often hitting the most vulnerable particularly hard. Therefore, combating the pandemic was an especially important task in 2020. Henkel significantly extended its emergency aid activities by launching a global solidarity program last year. This is in line with one of Henkel’s six sustainability focus areas, contributing to social impact.

To this end, the company emphasizes its commitment to further expand its positive social impact on communities by 2025: through 100 percent responsible sourcing, by leveraging its more than 50,000 employees, which have been trained as sustainability ambassadors and by helping to improve 20 million lives globally.

One example is Henkel's long-standing collaboration with the development organization Solidaridad to support smallholder palm oil farmers in South America, Africa and Asia. To date, this has already reached around 34,000 smallholders who cultivate around 305,000 hectares of land. 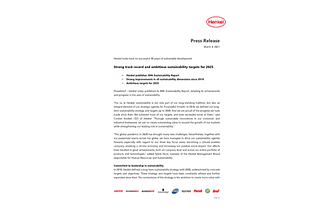 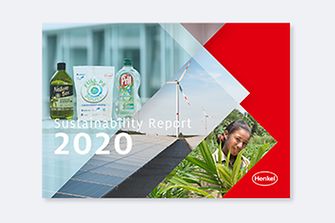