At Henkel’s Annual General Meeting today, Henkel CEO Hans Van Bylen presented the key developments of the fiscal year 2017 and outlined the progress that was made with regard to the implementation of the company’s strategic priorities. Based on Henkel’s strong business performance in fiscal 2017, Hans Van Bylen announced the payout of the highest dividend in the company’s history. He also confirmed the outlook for the current fiscal year 2018.

“We are looking back on a successful business year. We reached a new milestone in sales, exceeding the 20-billion-euro mark for the first time. We also achieved new record levels for earnings and margin. We delivered profitable growth. That is why we propose to the Annual General Meeting a record dividend of 1.79 euros per preferred share,” said Hans Van Bylen. “This success is a result of the commitment of our more than 53,000 employees worldwide. They are highly dedicated and committed to our company – every day and around the world.”

Dr. Simone Bagel-Trah, Chairwoman of the Shareholders’ Committee and the Supervisory Board, thanked the Management Board and all employees for their great commitment in the fiscal year 2017.

An increase by 17 cents per dividend of both share classes to 1.79 euros per preferred share and 1.77 euros per ordinary share was proposed to the shareholders, representing an increase of 10.5 percent or 10.6 percent respectively compared to the previous year. “The proposed dividend represents a new high,” said Hans Van Bylen.

Commenting on the expectations for the economic environment in the current fiscal year, Hans Van Bylen said: “Overall, the economic situation is good, but there are many points of concern. In Europe it is still not clear how Brexit will be implemented. This uncertainty is a burden on the economy.”

The CEO also referred to the recent discussions about tariffs, trade restrictions and possible countermeasures: “This is not favorable to economic development worldwide.”

“Prices for raw materials and packaging are likely to continue to rise compared to the previous year,” Hans Van Bylen added. “Foreign exchange rate effects will also remain a major factor. We anticipate very high volatility in this domain. We expect the US dollar to weaken further against the euro compared to 2017. In addition, some currencies of importance to us in the emerging markets could weaken further.”

For the fiscal year 2018, Hans Van Bylen confirmed the outlook for the Henkel Group: “We are committed to delivering sustainable profitable growth. For the full fiscal year 2018, we expect to generate organic sales growth of 2 to 4 percent. With respect to adjusted return on sales ‏(EBIT), Henkel expects an increase to more than 17.5 percent. Adjusted earnings per preferred share should increase by 5 to 8 percent.”

Addressing the delivery difficulties in the consumer goods businesses in North America during the first quarter of 2018, Hans Van Bylen said: “We very much regret that these problems have occurred. The causes have been identified and we are working on this with strong focus. We expect the supply chain situation to normalize in the course of the second quarter.”

At the same time, Henkel will continue to promote sustainability along the entire value chain and to further build on its long-standing, internationally recognized leading position in sustainability.

“We have made substantial progress in all areas of our strategic priorities,” said Hans Van Bylen. “We want to drive the successful development of Henkel. This is our common goal.” 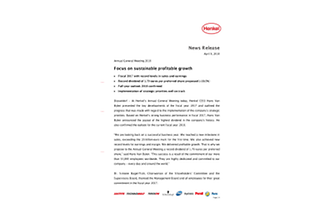