At today's Annual General Meeting of Henkel, CEO Carsten Knobel summarized the most important developments of fiscal year 2019, explained the effects of the current corona crisis and reaffirmed the long-term strategic focus on purposeful growth. He also described Henkel's ambitious goals in sustainability and emphasized the importance of diversity and rejection of racism.

Amongst others, the company proposed to its shareholders a dividend at the previous year's level. As part of the new elections to the Supervisory Board and the Shareholders' Committee, four new members are to be elected. The creation of a new authorized capital as an “anticipatory resolution” is also part of the agenda.

“2019 was no easy year for Henkel. We did not achieve everything we wanted,” said Carsten Knobel. There were, however, also a number of positive developments. “We increased sales by around one percent, to more than 20 billion euros. We achieved a margin of 16 percent. We generated a free cash flow of almost 2.5 billion euros. This is a new high for Henkel. We had a low level of debt at year-end. We strengthened our businesses through acquisitions during the year. At the same time, we kept costs well under control,” summarized Knobel.

Carsten Knobel thanked the more than 52,000 employees around the world. “Also in 2019, they showed full commitment to Henkel. That is why I would like to thank them.”

Also the Chairwoman of the Shareholders' Committee and the Supervisory Board, Dr. Simone Bagel-Trah expressly thanked the Management Board, all employees and the corporate bodies for their great commitment in the past fiscal year. “You all contributed significantly to our business success in a challenging environment.”

A dividend on prior-year level of 1.85 euros per preferred share and 1.83 euros per ordinary share was proposed to the Annual General Meeting. “This means we have raised the payout ratio. It amounts to 34.2 percent. Which is 3.3 percentage points higher than previous year. And it is thus also within the targeted range. Between 30 and 40 percent,” emphasized Carsten Knobel.

New elections to the Supervisory Board and Shareholders’ Committee

As part of the new elections to the supervisory bodies, Dr. Simone Bagel-Trah introduced the new members available for election to the Supervisory Board and the Shareholders' Committee to the shareholders.

“With the proposed new appointments, we are rejuvenating our committees, increasing diversity and expanding important areas of expertise. I am pleased that we can propose excellent new members to our corporate bodies,” said Dr. Simone Bagel-Trah. She also explicitly expressed her thanks to all departing members of the corporate bodies for their great commitment to the interests of the company.

Growth agenda for the future

After the report on the fiscal year 2019, Carsten Knobel looked ahead and presented the company's growth agenda for the coming years. “This decade should be a success for Henkel. A decade in which we set the course for Henkel’s future. With successful innovations for our customers and consumers. A decade in which we make our businesses even more competitive and further increase sustainable development. We will rigorously drive forward digitalization in all areas and become even more efficient and faster. And we will further develop our corporate culture. That is our agenda for purposeful growth. Our ambition for the future. This is what I stand for,” summarized Knobel.

Henkel has developed a clear strategic framework for this. It includes: a winning portfolio, clear competitive edge, particularly in the areas of innovation, sustainability and digitalization, lean business processes and new business models as well as a strong corporate culture.

Finally, Knobel discussed the current situation in the COVID-19 crisis and spoke about the implications for Henkel. “The underlying economic environment has changed fundamentally for the current year. We are seeing demand collapsing across many branches of industry as well as rapidly rising unemployment in many countries. This is also impacting our businesses,” said Knobel. In the first quarter Henkel had recorded a robust sales performance. He did not comment in detail on the business development in the second quarter but referred to the presentation of the half-year figures at the beginning of August. Nevertheless, it was clear that the second quarter would be difficult because the shutdown in many countries had occurred during that period, he added.

A realistic assessment on how the year would develop was currently not possible. “We therefore withdrew our existing guidance for the year in April. We will publish a new forecast as soon as this is possible,” said Knobel. “One thing, however, is certain. We will need to constantly adapt as the crisis evolves. The corona crisis will change our perspectives in the long-term. We will see the world with different eyes. Our behavior will change. We will react flexibly and quickly to the upheavals in our markets. Actively shape change. And break new ground,” Knobel made clear and was at the same time confident. “Our foundations are sound. We have seen this in the current crisis. And this is something we will build on in the future. We are well-positioned. And we will emerge stronger from the crisis.”

Both Dr. Simone Bagel-Trah and Carsten Knobel emphasized the importance of sustainable action in their speeches.

“In everything we do, we always strive to act sustainably. Regarding the environment, the economic success and our contribution to society. This is not a mandatory exercise for us or a marketing tool. For us, sustainable action is part of our culture and values. For many decades and we are proud of that,” said Bagel-Trah.

“Sustainable management is one of Henkel’s great strengths. We have a leading role here. For a long time now. Our pioneering role is regularly confirmed in ratings and rankings. Which is why we aim to further strengthen sustainability. As a clear competitive edge. For this we have defined the next milestones and specific targets. For instance, with regard to climate protection and avoiding plastic waste,” explained Knobel.

Henkel strives to be a climate-positive company by 2040. In its consumer goods businesses, all packaging will be recyclable or reusable by 2025.

Commitment to diversity and against racism

In his speech, Henkel's CEO also emphasized the importance of diversity for the company success and vigorously spoke out against racism. “Our employees come from more than 100 nations. From all cultural backgrounds. We need this diversity. It helps us to be successful. Which is why we consciously promote diversity in all dimensions,” said Knobel.

“For us, it is the individual who counts. With their experience, their knowledge and their ability to contribute. Not gender or age. Skin color, nationality, sexual orientation or political leanings. This should all go without saying. Yet it still needs to be emphasized again and again: Discrimination and racism are unacceptable! We embrace diversity. We are committed to diversity. And this too feeds into our corporate culture.” 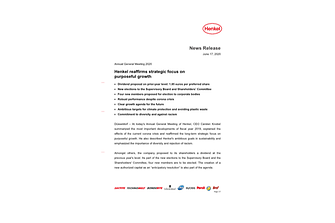