Change in the Henkel Management Board

Sylvie Nicol ‏(45), currently Corporate Senior Vice President Global Human Resources, has been appointed to the Henkel Management Board. Effective April 9, 2019, after Henkel’s Annual General Meeting, she will become responsible for Human Resources ‏(HR) and Infrastructure Services. She will succeed Kathrin Menges ‏(55), who will not be available for another term on the Management Board for personal reasons. Kathrin Menges joined the company in 1999. Since 2011, she has been member of the Henkel Management Board.

“We would like to thank Kathrin Menges for her many years of outstanding service, commitment and leadership. She has strategically realigned the HR unit and successfully introduced numerous new global HR concepts and programs. As Chairwoman of our Sustainability Council, she has driven continuous improvements for sustainable action at Henkel. With Sylvie Nicol, she has also developed a highly qualified successor from within her HR organization,” said Dr. Simone Bagel-Trah, Chairwoman of the Supervisory Board and the Shareholders’ Committee of Henkel.

Kathrin Menges joined Henkel in 1999 and subsequently took over more management responsibilities within HR. In 2009, she became Corporate Senior Vice President, responsible for Human Resources. In 2011, she was appointed to the Henkel Management Board, responsible for Human Resources as well as Infrastructure Services. Kathrin Menges is also Chairwoman of Henkel’s Sustainability Council. In 2013, she was appointed to the Council for Sustainable Development by the German Federal Chancellery.

Her successor, Sylvie Nicol, brings longstanding management experience of more than 20 years at Henkel to her new role. “We are very pleased that Sylvie Nicol, as an internal successor with extensive experience at Henkel, will join our Management Board team as Executive Vice President Human Resources. With her strong background and track record in both our operating business as well as in HR, she knows the company, our markets and employees very well. She gained valuable experience abroad as well as at our headquarters in Germany,” said Henkel CEO Hans Van Bylen.

In 1996, after graduating from the renowned ESCP Europe business school, Sylvie Nicol started her career at Henkel in marketing in the Beauty Care business unit in France. In 2010, she became Corporate Vice President and General Manager Beauty Care Retail in France. In 2013, she moved to Henkel’s headquarters in Düsseldorf, being responsible for Human Resources at Beauty Care. One year later, she became Corporate Senior Vice President and took over business responsibility as Head of Beauty Care Retail in Europe as well as Global Sales at Beauty Care. Since the beginning of 2018, Sylvie Nicol has been Corporate Senior Vice President Global Human Resources, responsible for strategic HR topics as well as for HR in the regions.

Sylvie Nicol was born in France. She is married, has three sons and lives in Düsseldorf with her family. 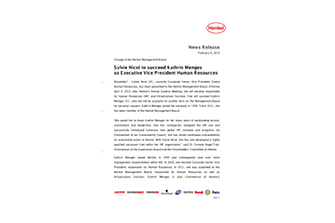 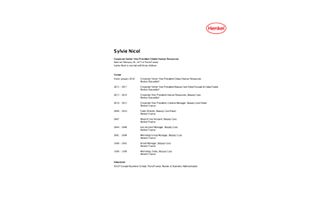