Success story points the way ahead

Henkel’s Engineered Wood business area will be showcasing its full product range of adhesives and adhesive systems for load-bearing engineered wood structural components at the LIGNA in Hanover, Germany. From May 27-31, customers and visitors are welcome to learn more about the Loctite Purbond brand in hall 27, booth B40. The Henkel product presentations will focus on the company's patented and certified adhesive systems and primers for the adhesive bonding of deciduous timbers, customized for individual species. Another highlight will be the new application system FlexA, for mixed adhesive preparation, which offers precise timing and maximum flexibility for production operations.

Since their market launch in 1988, Henkel Engineered Wood’s Loctite Purbond polyurethane adhesives ‏(one-component and two-component PUR adhesives) have played an essential role in the production of load-bearing engineered wood structural components, defining the benchmark worldwide for the use of innovative adhesives in this segment. The development of high-performance adhesives such as Loctite Purbond have paved the way to modern high-tech timber construction in its current form.

Sustainable construction concepts with the use of environmentally compatible wood as a building material are currently in trend. This is also leading to the individualization of modern types of construction, such as wide-span engineered wood and multi-story timber buildings. Another key future trend for timber construction is the use of deciduous timber building materials. Load-bearing structures made from deciduous timber species allow a combination of ultra-wide spans and slim-line cross-sections.

Optimized use of primer systems

Henkel Engineered Wood continues to give high priority to the adhesive bonding of deciduous timbers and other species notoriously difficult to bond, such as the Douglas fir and the larch. Back in 2015 the company developed primers designed for individual wood species, as an adhesion mediator between the material surface and adhesive, to produce optimum adhesive joint strength in load-bearing wooden construction components.

After obtaining approvals for these primer systems for the bonding of beech and larch timbers from building regulatory bodies, the next step in the process was to eliminate the primer airing time factor from the industrial production of load-bearing engineered wood structural elements, subject to certain prerequisites. This allows the “inline” application of the primer, i.e. in the same operation as the downstream step of applying the adhesive.

The certified Loctite HS S Purbond product line enables the user to select the open time ‏(time interval between adhesive application and jointing) between two and 70 minutes. These adhesives are also characterized by an extremely favorable ratio between pressing time and open time, providing maximum flexibility for the user.

The viscosity and rheology properties of Loctite HS S Purbond adhesives allow optimum wetting of the joint surfaces with minimum application quantities. This adhesive system is used for finger jointing and surface bonding for the production of solid structural timber ‏(SST), cross-laminated timber ‏(CLT or X-Lam) and glued laminated timber ‏(GLT or glulam). It is also suitable for duo and trio beams and log-cabin planks, effectively covering the entire range of static load-bearing wood construction elements.

The products in the Loctite HS S Purbond line are free of solvents and formaldehyde, meeting the most rigorous emissions guidelines. This enables the manufacturer to offer its customers timber construction elements fully meeting the latest specifications for healthy indoor air quality in residential premises.

Loctite Purbond FlexA, or the new art of mixing

With the FlexA application system developed by Henkel Engineered Wood, since the beginning of 2018 it has been possible for two adhesives in the Loctite HS S Purbond line ‏(of differing reactivity) to be mixed directly within the user's operation to produce a bonding agent with individually adjusted open time – all with regulatory approval. The concept of FlexA is, through the precise mixing of a “fast” glue ‏(from four minutes’ open time) with a “slow” glue ‏(up to 70 minutes’ open time), to provide the optimum mixed adhesive, with a precisely defined open time for a very specific adhesive bonding requirement.

Hotmelt adhesives in the edge-bonding of single-layer wood panels

Hotmelt adhesives, based on a range of formulations, were formerly mainly used in the furniture industry. Now, however, they are increasingly being used in solid wood processing, as in the production of single-layer wood panels, which are then used in several layers to produce cross-laminated timber elements. In this case, the boards for one layer are joined to form a single panel with hot melt bonding adhesives applied on the narrow side surfaces. These adhesive bonds are mainly for the purpose of greater ease of handling during the production process: with the boards “stapled” together in this way, they are easier to lift into the press bed with a vacuum lifter. This results in greater process reliability and better product quality.

Because of their extremely rapidly formed initial strength characteristics, hot melt adhesives allow short throughput times in a continuous jointing process. This in turn allows the use of shorter press beds and hence more cost-effective machines and enables the feed rates for continuous presses to be increased, boosting throughput quantities.

An impressive example of the latest trends in engineered wood construction is afforded by Australia’s highest wooden office building. The ten-story structure in King Street, Brisbane was completed and handed over to its occupants in autumn 2018. Nine stories rise above the partially recessed ground floor, on a row of V supports of glued laminated timber. The load-bearing structure of the ten-story building consists of glued laminated timber supports and beams, combined with walls and ceilings of cross-laminated timber elements. The latter are jointed with Loctite Purbond adhesives to create high-performance load-bearing elements.

A further standout project was the Neckertal 513-m-long wooden treetop walkway in Steinwäldli nearby Mogelsberg – Switzerland’s first treetop walkway. The serpentine structure winding its way up from the ground to the treetops has been in place since May 2018. The main attraction is the lookout platform at a height of 50 m. The timber walkway, made from block-bonded arched beams of varying lengths, with variable cross-sectional heights and widths, rests on round wood supports. For the adhesive bonding of the cross-section elements of spruce boards, the manufacturers used both Loctite HS 181 Purbond and adhesives from the Loctite HS S Purbond product line.

Another highly original structure was the “MultiPly” made of cross-laminated tulipwood. The 9-m-high temporary structure was created for the London Design Festival 2018 ‏(United Kingdom) and erected in the Sackler Courtyard of the V&A Museum. The mobile installation comprises 17 semi-open modules, which overlap and intermesh. The cross-laminated timber panels of the modules were bonded with adhesives in the Loctite HS S Purbond product line, used in combination with a primer for deciduous species. The pavilion was designed to show that modular structures of cross-laminated deciduous timber could be a viable solution for the current housing shortages in large cities. 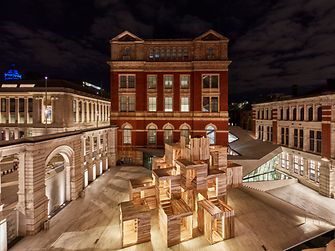 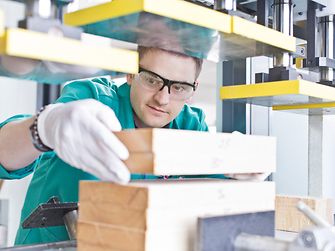